Cut driving test nerves with this one simple trick!

Do you feel nervous or even scared about taking your driving test?

Maybe you’ve taken a driving test and failed because your nerves let you down.

Test nerves can get the better of anyone on a driving test and is recognised as a major factor in failing the test.

Would you like to get the better of your test nerves and beat the driving test easily?

The answer, of course, is yes – and in most cases this is relatively easy. Now, there are cases where medically, nerves can be more than just a simple solution and this may apply to you.

You might feel that you suffer from more nerve problems than the average person, but the truth is that if I asked 100 pupils if they fitted that description, the majority would say they do.

Most test nerves can actually be sorted using one simple approach. This method has worked for almost all the pupils I’ve ever trained as a driving instructor. It actually came about when I took extra qualifications to become a teacher, because I wanted to know more about teaching and learning methods.

While studying, I looked into the psychology behind what typically caused nerves and took my own training to an advanced level. What I discovered though was more by accident than any scientific or educational approach. My education and research merely confirmed what I later found out.

Whether you have a driving test coming up, or have just failed one, sit down quietly and ask yourself “what would I most be afraid of if my driving test was today?” I have asked hundreds of pupils this over the years who claim they failed because of nerves and the answers are always of a similar nature.

These are just a few examples of some of the skill-based problems that pupils have mentioned.

Now imagine you’re sat in a test centre with all these things going through your mind. I would be nervous too. You’ll be in the test centre full of worry and hoping the examiner won’t get you to do the things you’re nervous about.

You start the test and drive off. Your mind is on the route, thinking things like “please don’t go right, that’s where that big roundabout is.” You’re not concentrating on the here and now. When this happens, it is so easy to rack up those driver faults.

Nervous? Find out how 1st 4 Driving can help here!

How do we avoid this?

About six weeks before their driving test, I would ask all my pupils “If your driving test were today, what would you be most scared of?” They would tell me the things that worried them most.

The next question was, “what would you like to do on today’s driving lesson?” Yes, they would always opt for the things they did not like. But then I noticed an odd thing happening on driving tests. Pupils were passing, but would have a little disappointment afterwards. This confused me.

“You’ve passed!” I would say. “Yes, but the examiner didn’t make me do (eg) that big roundabout” – the very things they used to be nervous about! The pupils were actually disappointed they did not get a chance to show the examiner they could do the things they were once afraid to do.

I realised that these pupils were sitting in the test centre, not nervous, but saying to themselves “come on examiner, bring it on!” They weren’t afraid of the things they were once afraid of – they wanted to show they could do them. A completely different mindset.

Imagine you weren’t nervous about any element of the test; how much better would it be for you?

Apart from not being ready, there are of course other problems facing you that can cause driving test nerves. One of which is the myth about driving test pass quotas.

Let me assure you as someone who has spent 20 years in this profession, someone who has researched, completed his own independent statistics on hundreds of driving tests on this matter and spoken to more examiners on and off the record than most driving instructors: There are NO SUCH TRUTHS.

There are no quotas. If you drive well enough on the day, you will pass.

Look at it like this. If you fail, the examiner must write up a small report after you fail in-between your driving test and the next one. What would you rather be doing, writing reports or having a cup of tea? These myths are often spread by bad driving instructors to justify their poor pass rates.

Another problem is caused using the term ‘minor driving test fault’. Minor faults have not been used since 1997. That was when we went over to our current system of marking to make the driving test fairer.

There are 4 types of driving faults:

Now, this next bit is important.

Every fault you commit on the road can be classed as one of the above. There is no such thing as “cutting the corner is always a serious fault.” The fault you commit, whatever it is, will be given its type based on what happens around you.

Let’s look at some examples

You cut the corner slightly: 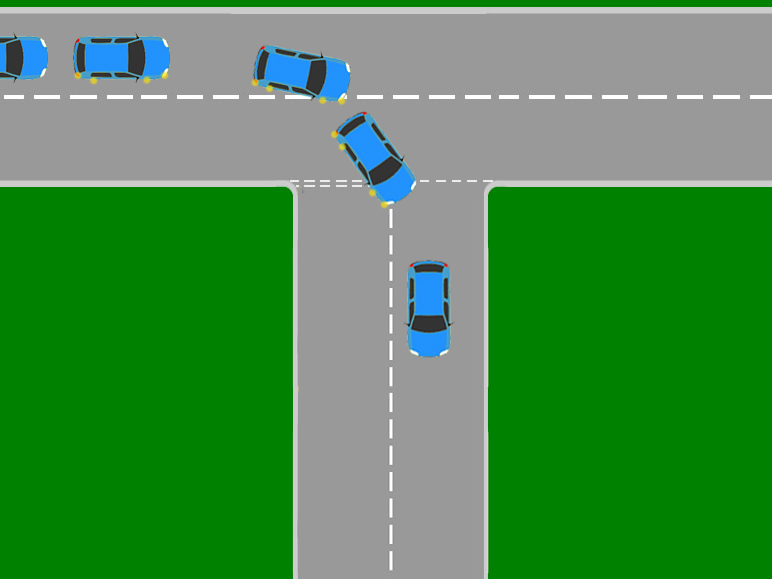 Here, you and the examiner can both see well into the road. There were no obstructions, no cars coming, no pedestrians or anything that could have potentially caused a problem. This is either a fault of no consequence, or a driver fault at worst. No law was broken and you caused no danger – or even any potential danger. 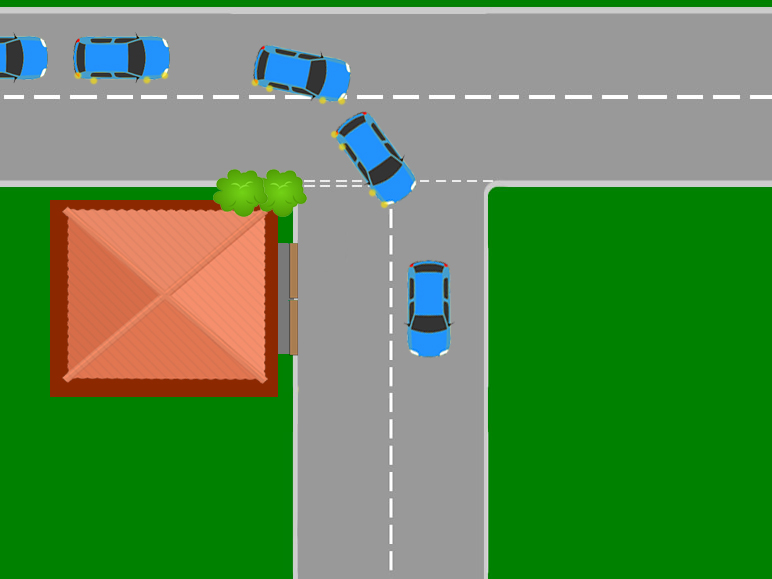 This time there was a slight obstruction and you could not see into the road. This becomes a driver fault (or if the obstruction was bad enough or a car was present and out of the way then maybe a serious fault). You see ‘potentially’ there could have been a problem. Potentially there was danger.

And again, the same corner cut: 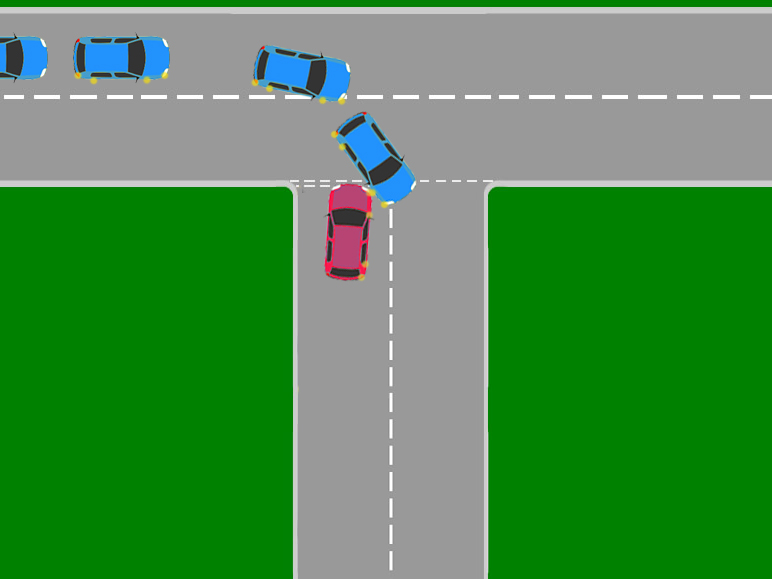 What if I go the wrong way?

Do not worry if you go the wrong way.

This often happens and if you do this safely then you will still be OK. Examiners will simply change to route to get you back on course. They do it all the time and often the pupil never even knows.

Remember – if you fail it might not seem like good news at the time, but the examiner has spotted something that is wrong with your driving. Something that if left uncorrected could cause you to have an accident later – or worse. Take the excellent advice given by the examiner and with your driving instructor, work on making it better. You will be on the road soon enough as a safe and confident driver.

Dave Foster MA, Dip.DI (or Driving School Dave) is the most qualified driving school owner in the country, after completing his Master’s Degree in Driver Training Education in 2011 at Middlesex University. He also holds a diploma in Driving Instruction and is a Cert Ed. qualified teacher. Dave is the founder and Managing Director of 1st 4 Driving Ltd, and also looks after over 15 driving schools across the country on a consultancy basis.

← Infographic: Why Our Driving Lessons Are The Best
Is My Driving Instructor Any Good? The 6-Step Guide to Getting it Right First Time → 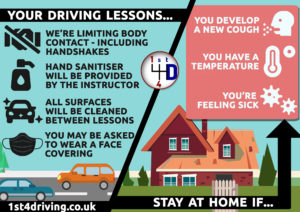 Green Lime
15:39 17 Aug 20
I passed my driving test in the 1st attempt with Mr. Tony Hislop. I can... not recommend Tony enough for the amount of experience and driving tips he is willing and capable of sharing during the lessons. He is very well familiar with all test routes, test centres, and examiners. The test route I had was actually one that Tony took me through twice or 3 times at least. Thus, I was extremely comfortable on the test day. Tony is so honest he would tell you whether or not you're ready for the test even if the number of lessons is comparatively small. He will make sure a number of times you've got all your show me- tell me questions covered. He'll actually give you even more tips that only driving experience for a long period of time would give you. He's patient, friendly, and is always on time (a few minutes early actually! :-) I think Mr. Hislop is such an asset for 1st 4 driving! Cannot wait to start my Pass Plus with him soon I hope.read more

Dennis Kuzmenok
16:09 16 Mar 20
Anthony is super calm. He has a great knowledge of how the tests are done... and what skills you need before you go for your test. Recommended:)read more

📷 Infographic: A-Z of Learning to Drive

Is My Driving Instructor Any Good? The 6-Step Guide to Getting it Right First Time 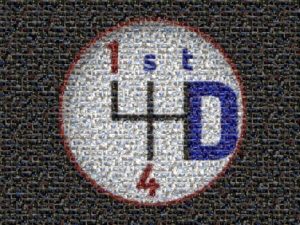 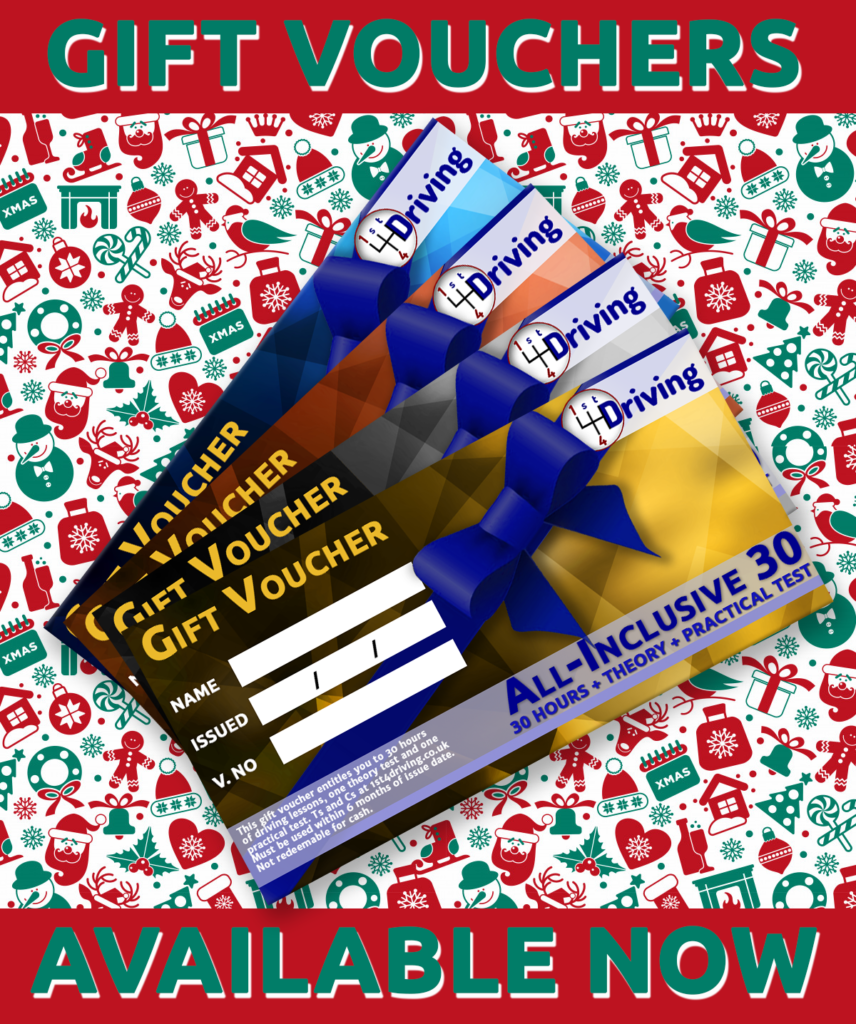 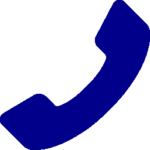